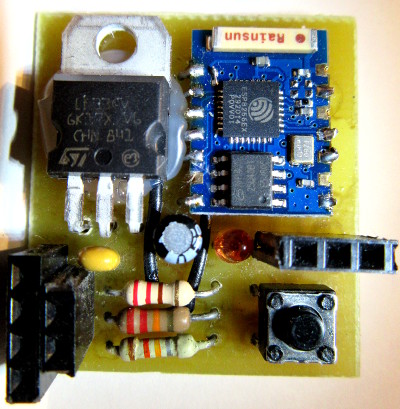 After my first steps with the ESP8266 I got far beyond a hello world application. I’ve replaced my old self-made water level gauge with a new self-made one powered by an ESP8266 SoC. The old one have an ultrasonic sensor that sits in my cistern. The sensor was driven by an AT89C4051 micro controller with also controls a big 4-digit 7-segment display.

I’ve started my development with the esp-open-sdk build environment on top of an ubuntu 15.04 server. After I got the blink example running I’ve ported my already existing c code for measuring the water level from the AT89C4051 to the ESP8266. That was the easiest task. Next I integrated the esphttpclient from Martin d’Allens into my project. Thanks Martin for the nice piece of code.

After that I could measure and post the values to Thingspeak. But I’d a big problem. The current consumption. I would power the my Internet-of-Things device by solar energy. So I connected the two pads on the PCB to get the deep sleep feature running.

The device is now powered by a cheap solar accu pack. Most of the time the device is sleeping. I wakes up regular with Wi-Fi modem deactivated to save power. Then it measured the water level and compares the values with the last measurement. If the measured value has not changed too much then the data should not be posted to save power. But after a configurable time span the data will always posted, even if not changed.

I’ve released the source code under the MIT License on github. The binaries for the version 0.1 for the 512KB flash version only can be found also on github. 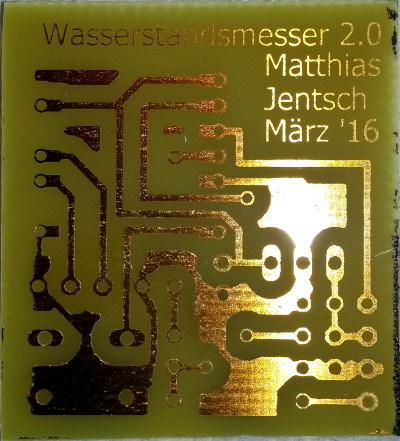 The schematics and the board layout are created with EAGLE. I’ve decided to make a single sided board to make it easy to manufacture the PCB at home. For the hardware you need the following parts:

With the board layout file you can create the PCB by your own or order the PCB via internet. After drilling the holes I suggest the assembling in the following order:

You need also a cable from your solar accu pack to the 2-pin header.

And for downloading the firmware to the ESP8266 you need a cable for the 3-pin header for the serial port. Most people use a USB to serial converter like the FTDI232 to connect the module to the PC.

See the pictures below to find the correct pin assignments. 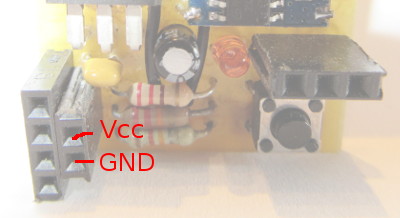 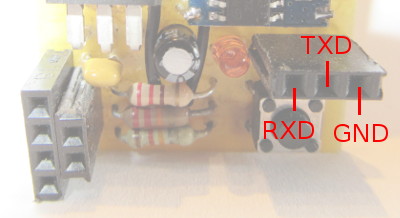 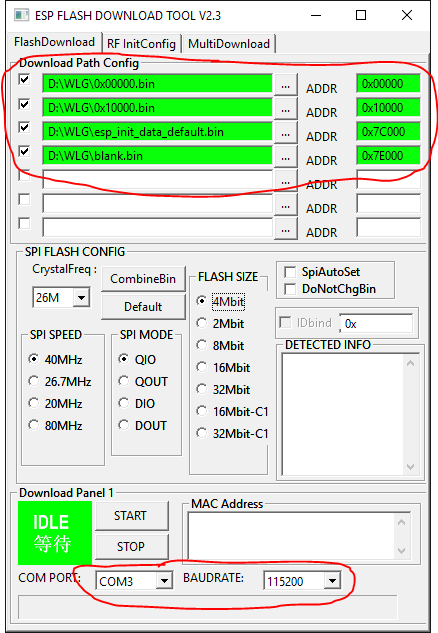 For flashing the firmware into the ESP8266 I suggest the orignal tool from Espressif the manufacturer of the ESP8266 chip. You need to flash the two files from github (0x00000.bin and 0x10000.bin) and the files esp_init_data_default.bin and blank.bin from the bin directory of the Espressif SDK 1.5.2. Start the flash download tool, select the four files for download, adjust your com port and set the download speed. I suggest a baud rate of 115200. The SPI FLASH CONFIG group must not be changed. The flash will be auto detected.

Connect the water level module via the 3-pin header to your USB-to-serial converter and the converter to the PC.

For flashing the firmware the module must enter the download mode. To achieve this do the following in this order:

The download should start immediately. Maybe you need to practice this a few times because it must be done in a few seconds. After the download starts you can release the micro button.

The download lasts a few seconds. If it’s finished with success disconnect power, close the download tool and open a serial terminal like Putty or CoolTerm. Adjust the COM port, set the baud rate to 74880 and open/connect the COM port. Then power the water level gauge module on.

If all went good the LED of the module blinks slowly and the module enters the configuration mode automatically. if you find the message

in the terminal window you can start with the configuration of your module.

The configuration is done by sending a JSON data string via TCP/IP connection to the port where the module is listening. You can send the JSON data via smart phone. I use the free of charge Android app TCP client for the configuration. But it’s up to you, what way you choose to send the data. You need only a Wi-Fi enabled device that’s capable to connect via WPA2 to the Wi-Fi access point, connect to the TCP server socket and send the data string.

Simply connect the Wi-Fi of your smart phone or similar device to the access point „WaterLevelGauge“ that the module provide. For the Wi-Fi connection you need the password „IoT-Wlg!4711#“. In the TCP client app or similar tool you need to connect to the IP 192.168.4.1 port 1253.

Here is an example of the configuration to send:

Adjust all the settings in the example to your needs.

For setup a Thingspeak channel that will work with the Wi-Fi water level gauge you need first register for a free account at Thingspeak. Then you should setup a new channel with three fields. The module will post the following values into the three fields:

To configure the module to send the log to the TcpLogger adjust the configuration and set the parameters accordingly: