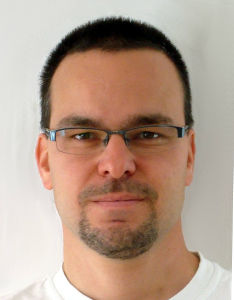 My Name is Matthias Jentsch. I was born 1975 in Aschersleben / Germany. After four school years in Aschersleben my parents moved to Winningen and I went to school in Neu-Königsaue. From the ninth school year on I attended the Gymnasium Stephaneum in Aschersleben. In 1994 to got my abitur. After that I studied surveying at the Fachhochschule Anhalt in Dessau. Before I started my work life I got through the 10 month of mandatory army period.

During my first job at IMP GmbH in Halle I found out that I should make my hobby to my profession. Since I was 14 years old I studied books about computing and programming. On my C64 I programmed in Basic and in Assembler. After that I’ve learned a little bit Turbo Pascal on the PC and a little bit more Turbo C. During my college period I’ve learned Visual C and programmed with the Visual Studio IDE. For my first job at IMP GmbH I programmed many macro fors Bentleys MicroStation and a program package for a local enery distributor for updating old analog plans with new digital data.

After three year at IMP GmbH I changed the job and went to the former GEF-RIS AG (now Bentley Systems) in Leimen. They recuited me as a software developer.

My first task at GEF-RIS AG in 2002 was learning programming in C#. At this time the new .NET framework 1.1 was the cutting edge. Until 2010 I’ve written software for a product called sisNET. In 2009 I’d passed some Microsoft exams for C# and got a MCTS. After the company moved to Hirschberg I decided to change the job again and went to the Gebhardt Systems GmbH in Sinsheim.

In December 2014 I’d passed the 70-483 exam „Progamming in C#“. Now I’m a Microsoft Certified Professional and Microsoft Specialist for Programming in C#.